Tribute to Elizabeth II: why Kate Middleton and Meghan Markle are not invited 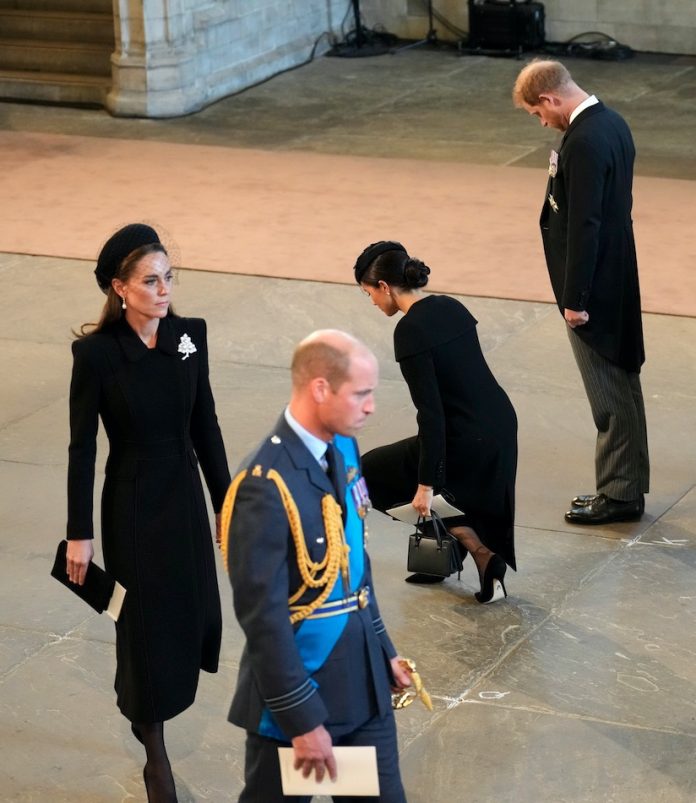 The eight grandchildren of Queen Elizabeth II will hold a wake for the monarch’s coffin on Saturday 16 September. An event to which none of the Duchesses Kate Middleton and Meghan Markle have been invited.

The wake will take place 24 hours after that of their parents. On Saturday, September 16, the eight grandchildren of the Queen will come to Westminster Hall to mourn together before the coffin of their grandmother Elizabeth II. Prince William, wearing a military uniform, will lead the march. He will be followed by his six cousins: Peter Philips and Zara Tindall (Princess Anne’s children), Beatrice and Eugenie of York (Prince Andrew’s daughters) and Lady Louise and Viscount James (Prince Edward’s children). Prince Harry will close the line. At the request of his father King Charles III, he will also wear the military uniform. An outfit that had been refused to him during the procession of the coffin.

The event was organized exclusively for the eight grandchildren of the deceased monarch. It excludes the companions of those who, among the eight, are in couple. Thus, Mike Tindall (husband of Zara Tindall), Edoardo Mapelli Mozzi (husband of Beatrice of York) and Jack Brooksbank (husband of Eugenie of York) are not invited. And the same goes for Princess Kate Middleton and Duchess Meghan Markle.

Who will attend the funeral of Elizabeth II?

Kate Middleton and Meghan Markle, who have already greeted the casket of Elizabeth II, will be able to make up for it by publicly paying their respects two days later at the funeral of the Queen. They will both be present, as will Mike Tindall, Edoardo Mapelli Mozzi, Jack Brooksbank. The Queen’s eight grandchildren will also be present.

On Monday, September 19th, the royal casket will leave Westminster Hall at 10:44 am local time, arriving at Westminster Abbey at 10:52 am. The ceremony is scheduled to last until 11:55 am. The Last Post will be sounded, followed by two minutes of silence. The National Anthem will be played at the end of Elizabeth II’s funeral at 12:00 noon sharp.

King Charles III: the first official photo of the king unveiled with a discreet tribute to his parents

Camilla Parker Bowles, Queen Consort: How she plans to modernize the monarchy

Princess Charlene and Albert of Monaco reunited: The couple smiling and accomplice for a good cause

Princess Charlene of Monaco sublime: She puts on a dress all in transparency

Princess Charlene and Albert of Monaco reunited: The couple smiling and accomplice for a good cause

Charlene of Monaco defended by her niece Pauline Ducruet: I know what’s going on

Some Of The Royal Children’s Naughtiest Moments In Public